Hereditary is my favorite horror film to date.

If you haven’t seen it, I can’t go into detail as to why. Giving too much away will rob you of the mind-boggling, tension-building experience that’s part of what makes the film so sublime.

Here’s all you need to know: A family mourns the death of their matriarch. Toni Colette plays Annie, the mother, and she is nothing short of spectacular in this role. And lastly, you’ll cruise the first 90 minutes of the film with a steady dread, and then the last 30 minutes will really freak you the fuck out.

This isn’t a great film in comparison to other horror flicks. This is a great film, period. Beginning with framing, Aster sets up shots beautifully and in a way that gets you wondering what’s real and what’s not. Then there’s the eerie music and distinct sounds  brought to the forefront of the film to play a significant role. And finally, the cast, all of which are extraordinary, but it’s Toni Colette that will make you want to fake a trip to the bathroom. Fight the urge. Stay put. Hereditary is a beautiful, terrifying work of art.

So you can imagine my excitement when I found out that writer/director Ari Aster had created another could-be (hopefully will be) masterpiece.

Straight from A24’s website, here’s the premise of Midsommar:

Dani and Christian are a young American couple with a relationship on the brink of falling apart. But after a family tragedy keeps them together, a grieving Dani invites herself to join Christian and his friends on a trip to a once-in-a-lifetime midsummer festival in a remote Swedish village. What begins as a carefree summer holiday in a land of eternal sunlight takes a sinister turn when the insular villagers invite their guests to partake in festivities that render the pastoral paradise increasingly unnerving and viscerally disturbing. From the visionary mind of Ari Aster comes a dread-soaked cinematic fairytale where a world of darkness unfolds in broad daylight.

It’s comforting to see a lot of similarities between Aster’s two films in Midsommar’s trailer alone, including the stunning visuals and ominous music.

You might’ve recognized Florence Pugh. She costarred with Maisie Williams (our beloved Arya in Game of Thrones) in The Falling in 2014. And she recently starred in Stephen Merchant’s comedy Fighting With My Family. She’s proven her talent over and over again, so I’ll be happy to see what she has to deliver in this film.

By the way…
If you too are a Florence Pugh fan, you’ll be happy to know that she’ll be playing Amy March in the remake of Little Women, starring Meryl Streep and due to be released Christmas 2019.

Whether or not Midsommar will be just as good doesn’t really matter actually. After Hereditary, I trust Aster. I believe in him. And I can’t wait to watch his new film. 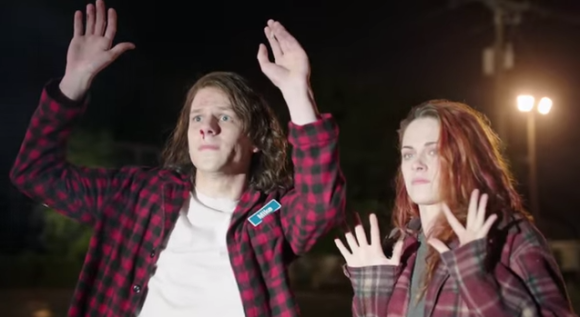 Ever wonder how the Bourne series would’ve turned out if Jason Bourne had been a chronic pothead?

Yeah, me neither. But it seems Director Nima Nourizadeh did. And he turned that thought into American Ultra, a film about a stoner whose world is rattled when he learns he’s an assassin, trained and now hunted down by the government.

With Jesse Eisenberg as the always-blitzed Mike Howell, we’re certain to get an interesting account of what it’s like to feel compelled to complete a secret mission when all you really want to do is smoke a joint and eat Funions. What a drag, dude. But hey, at least he’s got his stoner girlfriend, Phoebe (Kristen Stewart), he can count on. (And I’m sure K-Stew plays that role marvelously.)

Yes, this is The Bourne Identity with an adolescent twist–a series of “holy shit,” explosive action followed by a witty or otherwise amusing punchline. And though I’m not sure how kind it is to appeal to an already paranoid target audience with a comedy covered in conspiracy theory, I find the hybrid of genres interesting and look forward to checking it out.

Out in theaters August 21st.

What Will Bradley Cooper Deliver in Aloha?

He scored high in Silver Linings Playbook (2012), The Place Beyond the Pines (2013), American Hustle (2013), and American Sniper (2014). Will he deliver another great performance in this romantic drama, or will we be saying “Aloha” to his stellar streak? (Sorry. Had to.)

Set to premiere in US theaters on May 29th.

If you are not a fan of the Simon Pegg and Nick Frost duo, leave now. 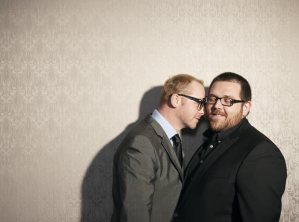 We are not of the same kind.

However, if you are, you will share in my excitement in anticipating their new upcoming film, The World’s End (in theaters August 23rd).

Both Simon Pegg and director Edgar Wright previously wrote Shaun of the Dead and Hot Fuzz. With this latest film, they’ll be wrapping up the trilogy, telling the story of five long-time friends who have reunited after 20 years to complete the ultimate pub crawl!

END_OF_DOCUMENT_TOKEN_TO_BE_REPLACED

Who doesn’t know the name Carrie?

Brian de Palma‘s adaptation of the Stephen King novel was released as a feature film in 1976, starring Sissy Spacek who scared the bejeezus out of us with those crazy eyes. 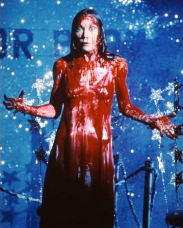 Since then, there have been other releases: a sequel, a made-for-TV film, and even a broadway musical–none of which I can rave about. But this October, another adaptation is set to be released in theaters, and this time Chloë Grace Moretz gets to sport the pig’s blood. 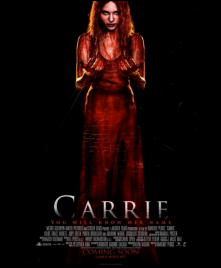 In this latest adaptation…

And in regards to the leading lady–
I love her, but might she be too cute (too pretty even) to play the part? I’m not sure she can creep me out the way Sissy still can.

END_OF_DOCUMENT_TOKEN_TO_BE_REPLACED 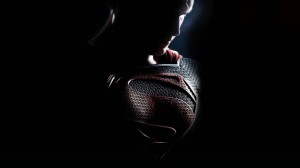 The first trailer had piqued my interest, and the second one showed there’s a good chance Christopher Nolan will deliver the same depth he gave us in The Dark Knight. And now this one…

Trailer #3 gives a deeper look into who, besides the very handsome (and talented) Henry Cavill, we’ll be seeing in Man of Steel.

First–
The effects look promising!
This might be a good chance for me to visit an IMAX theater for the first time. Yeah baby!

END_OF_DOCUMENT_TOKEN_TO_BE_REPLACED

A little late but…

I finally watched Kick-Ass! And just in time because Kick-Ass 2 should be in theaters this summer.

I must admit I was pleasantly surprised at how much I enjoyed Kick-Ass. I didn’t expect much from it; I guess that’s why I didn’t get around to watching it until recently. I mean– I wouldn’t be outraged that it wasn’t nominated for an Academy Award, but it was entertaining. I can appreciate that.

I’m not a comic book fangirl. My thing is movies. So before this movie came out, I didn’t know about “Kick-Ass,” the comic book. I knew nothing of the characters or the story. I had the impression it might even be a movie for kids… Yea, no. There is a good amount of violence and gore, which explains the R rating. I loved it!

END_OF_DOCUMENT_TOKEN_TO_BE_REPLACED

El Mayimbe of Latino Review has reported a bit of information that has me crossing my fingers until 2015. Christopher Nolan is rumored to spearhead the production of the Justice League movie, featuring Christian Bale as Batman once again. My reaction…

Let’s talk about the possibility of this movie’s success. As noted on Box Office Mojo, Joss Whedon’s The Avengers, featuring Marvel Comics’ superhero team, grossed at over $1.5 billion worldwide. Well, Nolan’s The Dark Knight and The Dark Knight Rises grossed at about the same– EACH. Add a few more superheroes to the mix, and well– you do the math.

END_OF_DOCUMENT_TOKEN_TO_BE_REPLACED

The most inappropriate part of the upcoming film InAPPropriate Comedy (2013) would be your participation in it, Adrien Brody. Rob Schneider– slightly disappointing, but not inconceivable. Lindsay Lohan– I won’t even go there. 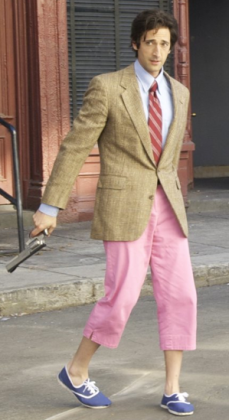 Adrien Brody on the set of “InAPPropriate Comedy” (Courtesy of IMDB)

You have an impressive curriculum vitae– for the most part. Your dedication to your character in The Jacket (2005) was reputable. Same goes for your contribution in The Pianist (2002), an impeccable performance. And then there was your substantial role in Midnight in Paris (2011) as the Spanish painter, Salvador Dali– a job well done.

But this… This is just for funsies, right? You owe someone a favor? Did you lose a bet? If you needed a break, fine. I’ll watch it, for blog’s sake!

Alas! I am still hopeful for what’s “in the works.” With a cast comprised of Liam Neeson, James Franco, Olivia Wilde, Mila Kunis, and Casey Affleck (just to mention a few), a romance drama like The Third Person (2013) might just be your shot at redemption. (Although– a good cast doesn’t necessarily guarantee a good movie. I mean, look at Movie 43.) If that doesn’t help, we can just wait with fingers crossed for the comedy drama The Grand Budapest Hotel (2014), which also features a pretty good lineup.

In the meantime, I’ll keep your Gillette commercial on loop: