2 Comments
By mynamesnotannie keepin' it reel

This movie is absolute lady-porn! 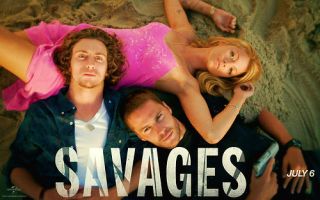 Oliver Stone’s film, based on Don Winslow’s novel, features two lead pot-growers in California– Chon (played by Taylor Kitsch), a rugged bad boy with PTSD, and Ben (Aaron Taylor-Johnson), a sensitive botanist with a desire to make a difference in the world. And right in the middle of these sexy men is O (Blake Lively), the girlfriend they share.

Where can I get a sweet deal like that?
Well, except for the part where O is kidnapped by the Mexican drug cartel. But that’s just a small price to pay to live with two handsome men in paradise and at the mercy of their sexual appetites.

I recognize that this isn’t much of a movie review, but that’s really all there is to it. Although, I would argue it’s significantly better than Showgirls.

So ladies, next time you stay in for the night, pour yourselves a glass of wine and feast on the man flesh. Imagine you’re the damsel in distress, and the two shirtless men are coming for you.

That’s what I did.

2 thoughts on “Savages, the Ultimate Libido-Enhancer”